Specific Example of Why I Love/Need/Prefer Book Publishers 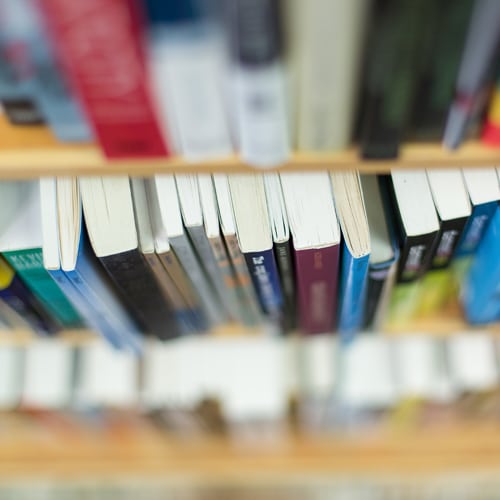 To be upfront: this is a really specific scenario—I know that my husband Karl and I are not average readers/book buyers. That said, here’s my sordid tale about how I mistakenly purchased two print books made from badly formatted Word files from Amazon’s CreateSpace.

My husband Karl is an avid reader, and his birthday was coming up. Karl is very hard to shop for: he keeps lists of what he’s going to read (he’s a former bookseller), and I try to surprise him with something he hasn’t heard of, but would like, which is no easy task.

Also, we don’t read eBooks in my family. We have nothing against them, we just like print and bookstores and therefore always have a large stack of books to be read. I go to the library with our kids and request books from my reading list. Karl does not use the library because he likes to own the physical copy of what he has read. He likes going to used bookstores; it’s part of the whole book experience for him. (FYI, we met in a bookstore—we both worked at Borders; and FYI, Karl still buys CDs and has about 1,200 LPs; and FYI, we have a turntable we use quite frequently.)

Moving along, I follow Doug Armato, the Director of the University of Minnesota Press, on Twitter (@noctambulate). He tweets a lot about what he’s reading, and I noticed he reads some of the same books my husband reads. (Who has read all six volumes of Gibbon’s The History of the Decline and Fall of the Roman Empire in this day and age? My husband and Doug Armato, that’s who.)

Recently, Doug tweeted about Valancourt Books, a small press that republishes out-of-print fiction, including Gothic, horror, and supernatural novels. It sounded like something my husband would like, and maybe would not have heard of, so I asked Doug to recommend four books, and he did:

I think an ideal Valancourt title for him would be George W.M. Reynolds’ massive urban gothic The Mysteries of London. He outsold Dickens in his day, and the book is a remarkable chronicle of London from high to low. (It was inspired by one of my favorite books of all time: Eugene Sue’s The Mysteries of Paris, which is said to be the first “bestseller”). Volume II is still forthcoming, but the one in print is over 1000 pages and really remarkable on its own.  Highly recommended.

Valancourt also has a new edition of one of the key Gothic texts, Matthew Lewis’ The Monk which is a remarkable reading experience.

Then, for a breezy but quite fascinating Edwardian Gothic, there is Richard Marsh’s The Beetle which has emerged as a key text in feminist studies for its quite hysterical view of “foreign” sexuality along with a positive view of “the new woman” or, alternately, his A Spoiler of Men which is the first zombie text in English (interesting for seeing the zombie as an economic force).

So this was perfect! I clicked on over to Valancourt, and darn it, I couldn’t buy the books directly from them. I do like to buy books directly from the publisher: I’m in the industry and aware of how sales and discounts work. I am the publisher services rep for—and a strong advocate for—Direct-to-Consumer sales at Bookmobile. I value publishers, and one way I can support them is by giving them a bigger cut of the retail sale.

I do understand it’s not always easy to sell Direct-to-Consumer, though Bookmobile can help with that, and I have already made my sales pitch to Valancourt.

My options on the Valancourt website were eBook (no), Amazon (Hell no), and Barnes & Noble (okay). I clicked directly to Barnes & Noble and bought the four titles above. I bought two of the Valancourt editions, but for The Monk and The Beetle, there were multiple editions available in multiple formats, and it was not clear who the publisher was. So I winged it.

The books arrived, and holy hannah! The Valancourt titles looked great but the other two were horrible. The Beetle was a badly formatted Word file. No publisher information, no blank pages, the half title page was on a verso, the chapters ran together, the recto page numbers disappeared into the gutter.

The Monk was even worse. The same as The Beetle but in 6-point type! 6-point type! I returned both books and said why on the slip.

I went back and looked up the horrible titles on Barnes & Noble by the ISBN, and guess who the publisher was? Amazon’s CreateSpace. I would have never purchased these books had I known. The content is no longer under copyright, and I guess I should have been wary that their content was cut and pasted and being farmed through CreateSpace, but I did not think I would be buying that kind of book from Barnes & Noble.

The Valancourt editions are great. They were printed through Lightning Source and have the telltale barcode on the last page. Valancourt scanned the interiors from a previous edition, ran OCR, proofread thoroughly, and the page layout is nice.  I like page layout, I like readable type, margins, copyright pages on the verso, and chapter openings on the recto. I like back cover copy, and I like a new scholarly introduction to the text. This is what publishers do, and I value it, and I will pay for it—I’ll pay the publisher, or my local bookstore, or the giant bookstore (but not Amazon).

Yet another reason why I want publishers. They are good gatekeepers. They are experts at publishing books—good ones—and it shows. There is so much that publishers do that is invisible to the reader until those things go missing: metadata so a book can be found, design and typesetting, cover design, marketing plans, and the whole of a publisher’s experience with many books, not just a single title.

Again, totally specific situation, but when I see comments in articles about Amazon, with some folks thinking publishers do not do anything and are not needed, I may have to smack them upside the head with one of those unreadable books.