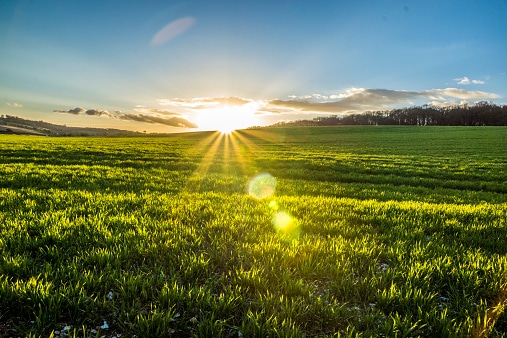 At Bookmobile, we’ve been concerned for a long time that the energy we use to make your books comes from clean sources, and we have been frustrated that we have not been able to do that consistently. But there is really good clean energy news on the horizon—and not just for book printers.

It takes a lot of electricity to print books. Every piece of equipment we use—presses, binders, cutters—runs on electricity. Binders also use compressed air, which requires running big air compressors—notorious energy hogs. Controlling ambient humidity and temperature are critical for maintaining printing and binding quality, so we humidify our shop air in the winter and cool it in the summer: that takes a lot of electricity. Add in shop and office lighting, as well as a data center running 24/7. Altogether it adds up to a hefty bill from Xcel Energy every month.

Besides the dollar cost, a much bigger issue long term is the fact that 46% of the electricity produced in Minnesota comes from coal-fired generators. Globally, coal produces a whopping 44% of the CO2 that is warming the planet via the greenhouse effect. In addition, coal burning causes smog, acid rain, and toxic air pollution. Coal-generated electricity has the reputation of being cheap, but that is only because the real costs of dealing with its nasty side effects are not factored in.

We would love to reduce electricity cost and reduce the amount of pollution indirectly generated by our productive activities.

On the conservation side, we have looked at programs where Xcel will throttle our energy during peak demand periods, but peak demand periods are unfortunately our busiest production hours, and throttling air conditioning causes people and machines to malfunction. Our four Océ monochrome printers, new last year, are much more energy-efficient than our old printers, so that has led to some improvement. We use programmable thermostats, but in an industrial building it is really tough to manage heating and air conditioning: people wind up freezing or roasting if you get too creative, and we have people working most of the night. There is no big gain to be had by making their working conditions miserable.

We paid extra to Xcel Energy for a number of years to source energy from wind. Despite my personal wishes to continue sourcing wind energy, the extra cost—along with a lot of other expenses—had to go after the scary 2008 recession. Fortunately, wind energy is now becoming just a standard part of the energy mix not requiring voluntary surcharges from customers. Xcel continues to increase the amount of wind energy in its mix, but coal still predominates.

We initiated a plan to put photovoltaic (PV) solar collectors on our roof. While this would not have replaced all the energy we get from Xcel, it would have helped tremendously during peak demand periods. Credits from the state and federal government made the project completely doable. However, we don’t own the building, and the landlord—who, we were told, was a group of North Dakota farmers made rich by the oil boom—refused to go along with it.

Even though our efforts to reduce energy use overall and eliminate dirty sources of energy have been constrained by the necessities of running a business in a very competitive industry, I have continued to watch renewable energy technologies over the last five years. And lately, there has been a ton of good news. We are at an unmistakable inflection point in the global energy regime. Wind and solar energy are going to crush fossil fuels, despite the the fact that fossil fuels receive five times as much government subsidy as renewables, and against the headwinds of politicians who are happy to trade today’s campaign contribution for maintaining the energy status quo. When they do, even small companies like Bookmobile will not be forced to make a choice between our children’s future and staying in business.

Solar Costs Are Plunging and Utilities Are Freaking Out

So here’s the good news. Solar costs fell 99% from 1977 to 2013 and another 10% in 2014. Deutsche Bank has predicted that solar will be the dominant form of energy by 2030, while others are projecting it will be the cheapest form of energy within a decade.

An important concept in comparing renewable energy sources is “grid parity,” which refers to the point at which a renewable energy source becomes as cheap as the current price of electricity from traditional sources. The Deustche Bank report predicted that solar generation will reach grid parity for 80% of the world by 2017. And, while fossil-fuel-generated electricity keeps going up, solar will keep getting cheaper as production scales up and the massive investment in research improves solar efficiencies. 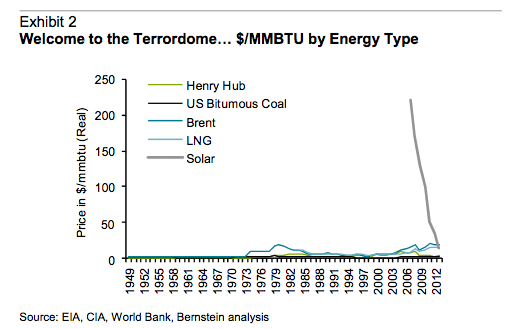 The old-line power companies—all regulated monopolies—are fighting back with exorbitant surcharges on solar users in places where solar is already at or below grid parity like Arizona and Hawaii. That’s an excellent sign: if they have to fight back in that way, then solar is a real threat. There are real technical issues in integrating solar into the grid, but utilities should be proactive in fixing those issues rather than trying to block inevitable change. Fortunately, while renewable energy is often seen as a partisan issue, there are some hopeful signs that in places where solar is taking off it has bipartisan support.

But the Sun Doesn’t Shine All the Time!

Key to solar’s market dominance will be storage, because, obviously, the sun doesn’t shine all the time. The good news here is that storage costs have been falling as fast as solar technology itself and are projected to fall much faster and further. One company, Solarcity, now sells its solar systems with battery storage from the electric car company Tesla for a whopping 60% less than it sold a system with comparable capacity just last year.

It Doesn’t Matter if Tesla or Solarcity Go Belly Up

While some critics point to the failure of some solar companies—Solyndra, for example—as somehow a negative reflection of the technology, that is exactly how new industries grow: there are many startups, most fail, and the survivors become the new industrial order. If there are no failures, there’s not enough investment to jumpstart the industry. That’s how it happened with railroads,  cars,  airplanes, and computers. There were huge investments, both public and private, in each of these sectors—in research and development, in supporting infrastructure, and in specific companies—and not all of those investments panned out. Nonetheless, each of these industries became gigantic economic drivers.

Wind Is Already Cheaper Than Coal

I haven’t said much here about wind energy, but the reality is that wind is already cheaper than fossil fuels even without subsidies in many cases. And, like solar, wind energy keeps getting cheaper. The key thing about wind and solar is that while there are capital costs and maintenance costs—just as there are with fossil fuel plants—the fuel is free forever.

Energy costs can only accurately be compared by factoring in all costs: construction, operation, fuels, and disasters. The result is called “levelized costs.” While estimates vary depending on who is compiling them, in most estimates nuclear is already more expensive than coal and natural gas. When solar costs drop below fossil fuels, they will therefore also drop below the cost of nuclear energy. Nuclear also has other issues. Big accidents, while rare, do happen, and when they do—Chernobyl, Fukushima—they put huge areas of inhabited territory off limits. The cost of such accidents are so huge they cannot be born by the utility operating the reactor, so the public pays them. In addition, new reactors are hugely expensive and risky to build. Promoters complain about onerous regulation, but really, after Fukushima they don’t have a leg to stand on.

Another rap on renewables is that they produce only a tiny proportion of energy: there’s no way they will ever be significant! Sure, and in 1831 investors didn’t think railroads could compete with canals, in 1920 it was hard to imagine global passenger airlines, and in 1977 the CEO of Digital Equipment Corporation said there was “no reason for any individual to have a computer in his home.” The fact is, if, as it appears will be the case in relatively short order, renewables-plus-storage are cheaper than fossil fuels without subsidies (even without the external costs of fossil fuels being factored into the price—though they should be!), then renewables will take over. End of story, and very good news.

I’d be happy to answer questions—you can contact me via email.  You can request a printing quote here.

Don Leeper is founder and CEO of Bookmobile, which has provided design, printing, eBook and distribution services for book publishers since 1982. He set up his first darkroom in a basement bathroom in fifth grade and has worked as a professional photographer. He continues to satisfy his love of photography through appreciation of great images, an interest in photographic technology, and trying to improve his own photography.