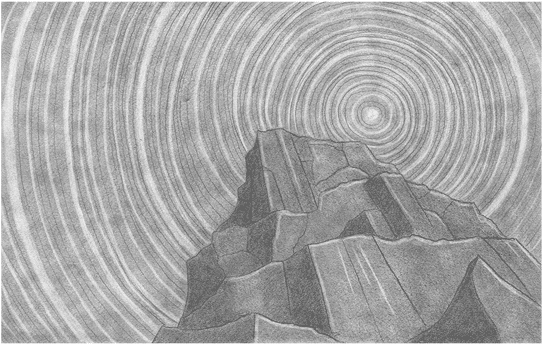 The Monolyth: Palace of the Black Star, Volume One had a very quick turn—it just shipped this week, and I first quoted the book’s printing for the author and illustrator, Jon Martin, in the beginning of December 2014. Right after receiving the estimates, Jon referred me to his Kickstarter page, so I could get an idea of what the book would look like and let him know what paper and cover treatments I thought would look best.

It’s a great-looking graphic novel, as you can see from the illustration above, with a compelling plot. It’s the first book of what’s going to be a great series. Jon keeps his readers updated on the series’ progress on The Monolyth website, with introductions to new characters, along with new artwork and more. I recommend checking it out!

Jon went all out on the book’s printing and binding: the interior is on our 60-lb. cream trade book at 436 PPI, the cover is 4-color on 10-pt. C1S stock with lay-flat matte film lamination, French flaps, AND foil stamping on the front cover and spine. We even split the colors of the foil stamping—we did a very small number of books with gold foil, then the remainder with silver foil. It’s a really saturated purple cover too, so both the gold and silver foils pop, and book publishers always want their cover to pop, right? (I will have photos of the cover and interior pages in the Gallery eventually.)

Jon is selling the series himself, direct to consumer (D2C), a smart move that Bookmobile is a fan of (read more about D2C here). He’s developed his audience for the books and by selling it directly to his readers and not through a distributor or retailer, all of the profit goes to him. And his audience and reader list will only grow with each new book in the series. From Jon,

Finding an enthusiastic book printer that would produce a book to the same standards that I put into my own work was something I was really concerned about when shopping around for an affordable printer. Bookmobile went beyond what I was expecting, and I would highly recommend them to anyone interested in making a high quality book!

We always have Kickstarter projects in the works (sometimes I don’t even know when something’s a Kickstarter book). Another one I am currently excited for is TAKK: Explorations of Nordic Cafe Culture. It has amazing photos—it’s still in the early stages, but we have printed sample pages so they can adjust the color images as needed before they see their full set of proofs. On the Bookmobile blog you can read the story behind Secret Atlas of North Coast Food, a guide to food and drink in the upper Midwest, which was an extremely successful Kickstarter campaign.

Need a quote for your Kickstarter book project or graphic novel? Contact me!