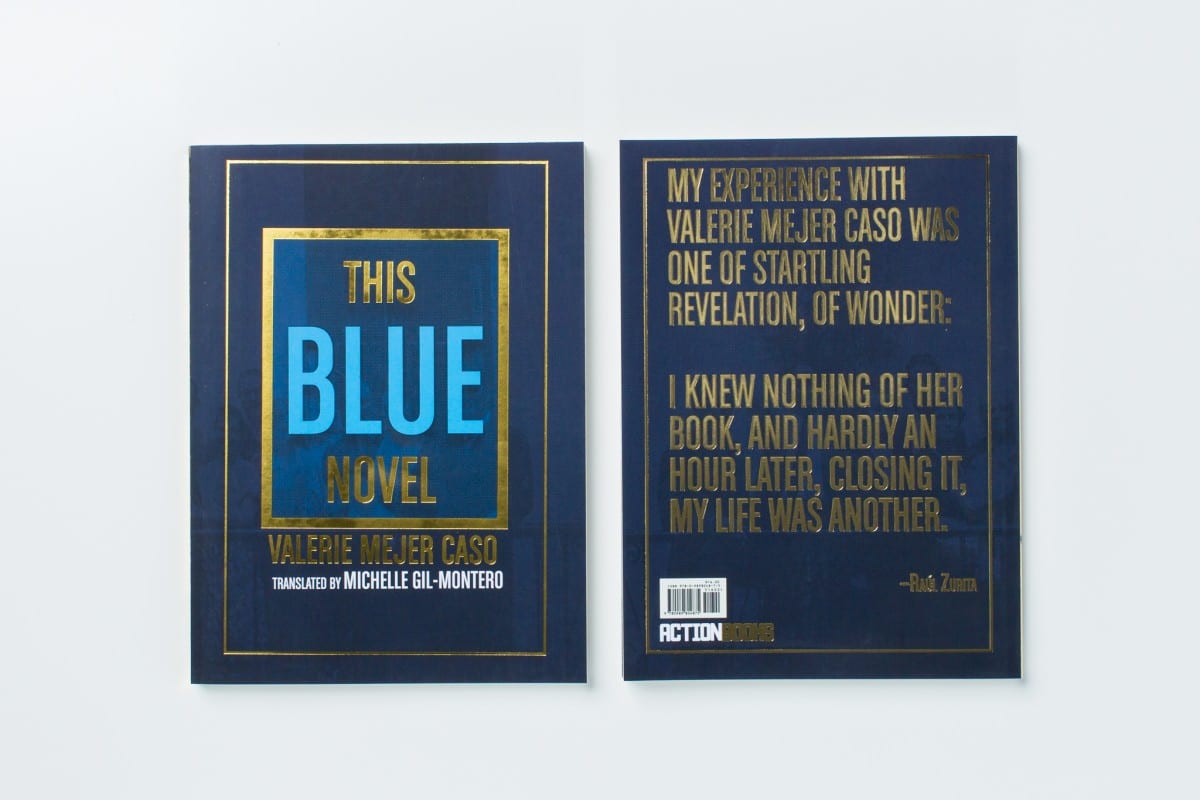 Action Books is our featured publisher this week. As quoted in Entropy’s Best of 2015: Presses, Magazines, Publishers and Journals, Blake Butler from VICEMagazine says:

“Action Books has been filling a gap in American publishing by translating works that are considered avant-garde masterpieces in other parts of the world into English. They’ve introduced Americans to writers from Sweden, Japan, Korea, Argentina, Chile . . . and the list goes on. They also published Tao Lin in the U.S. before you knew who he was and had some dumb opinion about him, alongside a variety of other singular, shape-defying voices including big guns like Aase Berg, Kim Hyesoon, Don Mee Choi, Raúl Zurita, Hiromi Ito, and countless others.”

Many of our favorite examples of foil stamping on paperback covers are Action Books titles. Above, you can see the large area foil stamp of This Blue Novel, and below, Rain of the Future: While the results are terrific, both books were difficult to produce, and the large area of the foil stamps increased the cost. A large-area foil stamp, like on both of the covers above, requires a large die. We pay by square inch area to manufacture a die, so the larger the die, the more the cost. Both books had the foil stamp on the front, spine, and back, which resulted in the manufacturing of two or three separate dies.

We also had to stamp the covers in two or three hits per cover, which increases the cost as well. A large-area foil stamp is tricky to produce. The foil is applied to the cover using pressure (the “hit”) and with a large-area foil stamp, we have to be especially careful with how much pressure we use. Too little pressure, and the finer lines or smaller images won’t show; too much pressure, and you’ll see outlines of the die or mar the cover and damage the lamination.

All that said, when you look at the covers above, we think the effort and expense pays off. If I’ve left you with more questions about foil stamping, see our Guidelines and Recommendations for Foil Stamping, Embossing, and Debossing.

Actions Books doesn’t foil stamp all their covers, of course, but even their “normal” covers are fantastic. All are designed by Andrew Shuta. Editor Joyelle McSweeney describes:

Our designer, Andrew Shuta, is like no other in the game. He brings a punk elegance to our designs and Bookmobile makes his fun but complex visions a reality, every time. Our distinguished authors are as delighted with these beautiful books as our readers. I truly treasure our longterm partnership with Bookmobile. I rely on them for the success of our press.

A favorite title of mine also has a really alluring cover, SorrowToothpasteMirrorCream: I recommend checking out their catalog to see more of their book covers, and of course, buying a few titles to read.